There are many posts that describe and illustrate the new features that CRM 2013 has introduced. Here are a few choice samples:


Having now spent quite a bit of time working and getting familiar with the new platform, my intention is to try and determine what might be considered features that provide compelling reasons to upgrade assuming that you are on the previous version of the product. That assumption includes the fact that you've spent some time and effort configuring CRM to suit your needs. So while there may be some features that make it easier to achieve certain configuration options that were implemented previously - that in my opinion would not provide a compelling reason to upgrade as there generally is not going to be a burning need to rework the option that has already been implemented and working as desired.

Let's also stipulate that I'm not advocating against upgrading. Rather upgrading is a strategic decision that needs to be weighed with other competing priorities and budgets. And therefore this is more of a question of whether this should be prioritized now or perhaps down the line. And let's make no mistake about it - Microsoft will be spending their time and effort improving the new platform rather than CRM 2011, so if you're planning on performing any major process improvements then you'd be well served to bite the upgrade bullet so you can leverage new capabilities. This post is not for you if you fall into that category. If however you are somewhere in between and looking for features that just may take you to the next level - then this might help put things in perspective.

In my opinion too many posts out there just hype features of the product without providing critical analysis of the real world advantage they're likely to bring. In my list below, I am endeavoring to analyze the features on their practicality and real world application.


NICE TO HAVE
Posted by Nahi Simon at 6:31 AM No comments: Links to this post

The Plugin Registration Tool has some important features to enable the effective troubleshooting of workflow plugins (and plugins in general). The following posts contain useful walkthroughs of these debugging features:

But sometimes I find that adding good old-fashioned trace statements to the plugin code can also come in very handy.

The following illustrates this form of debugging for workflow plugins: 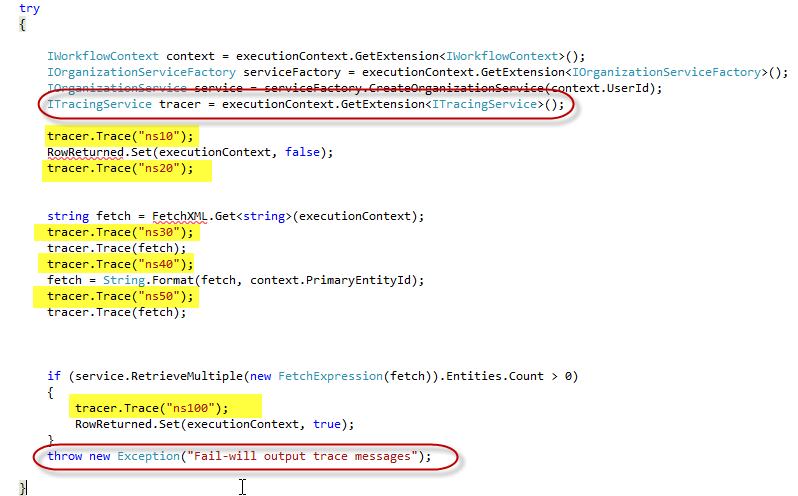 The plugin will fail as you have forced an error by throwing an exception. And you can now go into the failed workflow and view the trace information that was outputted.

Posted by Nahi Simon at 5:42 AM No comments: Links to this post